We’d been planning it for a while, and used facebook to organise the trip – it turned out to be 9 of us, so we booked and stayed at the Eagles bunkhouse in penmachno, which is a great place to stay if you’re in the area, and want somewhere cheap to use as a base for whatever outdoor activities you’ve got planned. It’s basically above/in the Eagles pub, so the evenings are usually spent drinking good welsh ale. They don’t serve food at the pub though, so we ate at a pub down the road called the silver fountain (and I can recommend the HUGE gammon steaks).

On the day of the ride, we set off a little later than planned and had a little bit of trouble finding the correct car park, but found it in the end (The rangers’ station car park, near Rhyd-du). It was raining, and it’s pretty difficult, psychologically, to start a ride in the rain, but it soon tailed off and we got our stuff together and set off. We were well kitted up, with waterproofs, lots of layers, food, drink, first aid kits and lots of mobile phones. 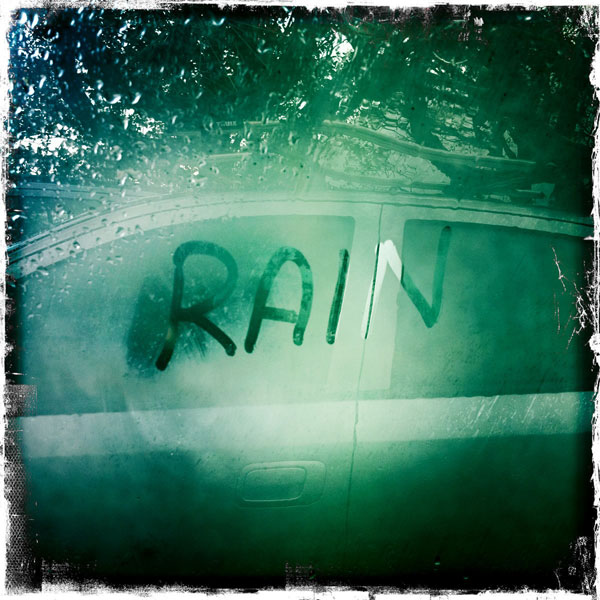 We chose to ride the rangers path, as it’s shorter, but harder, and there was likely to be quite a few people on the llanberis pass, many of whom might not appreciate moving out of the way for a bunch of mountain bikers. The first 30 minutes of the ride was steep, but rideable, with only the odd small section where it was necessary to get off and push or climb. Incidentally, I was carrying a cracked rib from a stupid crash in the peak district a week before, and found that out-of-the-saddle climbing hurt quite a bit, so mostly I’d sit and spin up. Further up, the trail essentially turned into a stream, with water up to 6 inches deep, and technical rocks underneath. This was where it turned into real mountain biking, and you could neither let off the power, or lose concentration – really good fun. 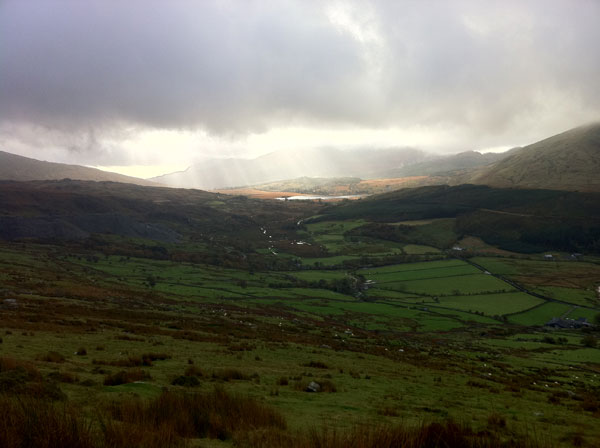 At some point, though i forget how far we had come, we got to where the cloud was hanging down, and it was also the point where it was no longer possible to ride. From here on in, it was 90% pushing, lifting, and carrying the bikes up and over the rocks. Those with light xc bikes, or who were particularly strong, could carry their bikes on their backs, but most of us just opted to push and pull our bikes. Slower – but less painful.

After another half hour or so, the wind really picked up, and it was possible to see the clouds whipping through the valley at incredible speed. Shortly after that, we had rain, and shortly after that, hail. The hail was the worst – strong, bitter wind at 90 degrees to the trail, flinging hailstones hard at you, while you’re struggling to push the bike just a few feet up some rocks. In terms of pure difficulty, it was some of the hardest “biking” I’ve ever done, and there were times when we would just look at each other with a kind of “What the hell are we doing?!” look on our faces. 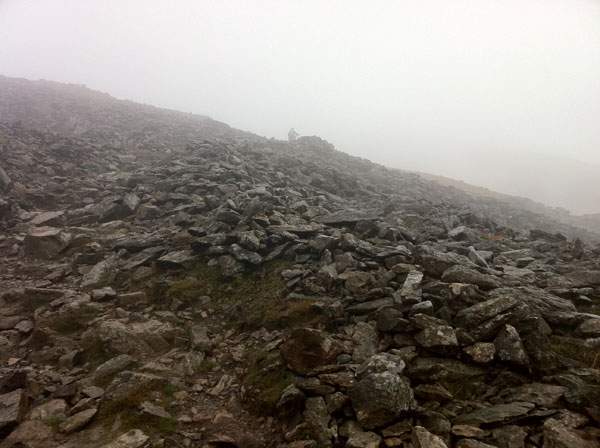 With visibility terribly poor – between 20 feet and 50 feet, depending on the thickness of the cloud at the time, we never really knew how far we’d come, or how far we’d have to go, but when we reached the train line, we knew we were nearly there, and it also levelled out a bit, with a few sections actually rideable. It was much busier here though, so it was slower going, having to pass a lot of walkers on their way to the summit. We got quite a few funny looks, and lost count of the number of times people asked “You rode your bikes up here?!” 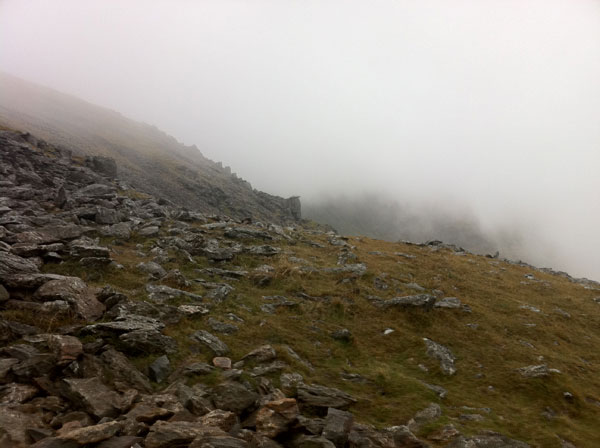 Rather suddenly, we were at the summit, and while it was heaving with walkers, we still managed to get our bikes up onto the triangulation point (we were damned if we were getting our bikes all the way up there and not to the top!), and took some photos. The ascent had taken us just over two hours. 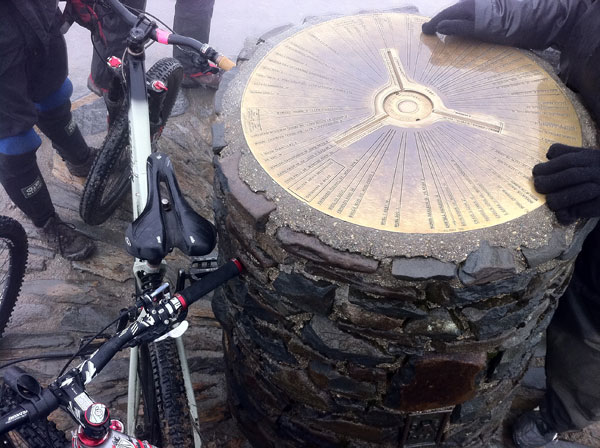 We all then had some sort of hot drink and a bite to eat at the snowdon cafe, added a base layer or two as it was definitely getting colder, and got ready to head back down. As there was a far higher risk of crashes on the descent, we planned to regroup regularly to ensure we didn’t lose anyone (though we nearly lost someone in the first few minutes, due to some confusion about whether they’d seen us head down).

Around 90% of the descent, if not more, is rideable – more so if it’s dry, I’d guess. And with only one or two minor spills, a couple of stops to regroup, it took us not much over 20 minutes to ride down. The trail had definitely collected more water, and we were soaked pretty quickly once we got to the wet sections. It’s a fantastic descent though, and some sections are really fast, while others take a bit more low-speed technical riding. Most of the walkers we passed were very good natured and let us pass easily, though there was a small minority who didn’t appreciate us being there – though I don’t know if they’re aware that bikes are permitted on Snowdon at this time of year. 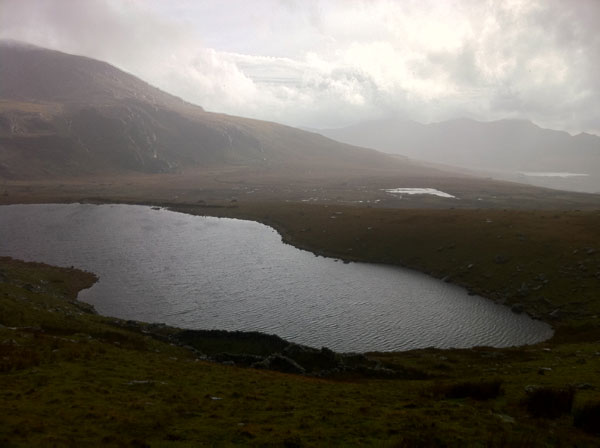 Sorting ourselves out again at the car park, there was already a lot of talk about which mountain to do next time…

Having been to a few shows and conferences recently, and acquiring a number of business cards that inevitably end up loose in my pocket, bag, or on my desk, I decided I’d better have a look for an iphone app that could read and OCR business cards and import the data into my contacts.

So, I downloaded and installed Worldcard mobile from the app store (£3.49), and tried it out. 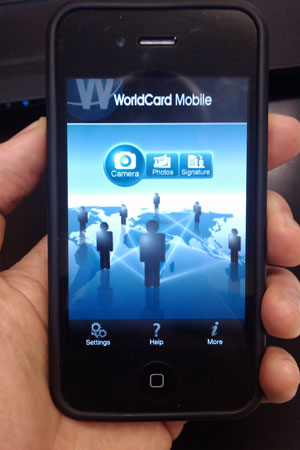 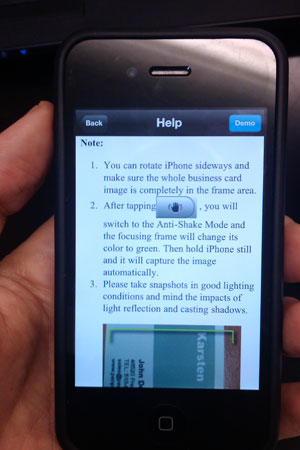 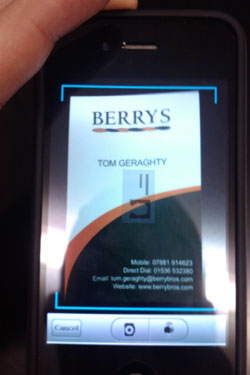 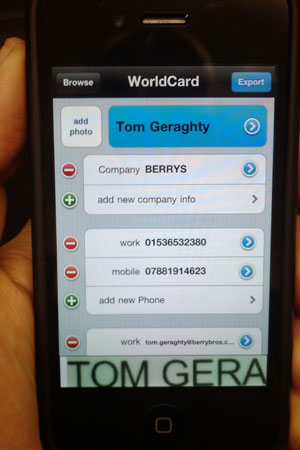 It works pretty well, you fire it up and are presented with a screen where you can choose to photograph a business card, use an existing photo, or use copied text from an email signature (which is a nice addition). Using the taking a photo option then simply gives you a screen with some border edges to get the image straight, and you take the picture. You need fairly decent light for this, and if the business card is laminated, you’ll need to be careful to angle it so you don’t get any glare. If mistakes are made, you can easily correct them in the app itself.

With almost all business cards, it works superbly, reading the text accurately, and placing the data in the correct fields (mobile, email, name, etc). The only issues it seems to have is with particularly colourful and strangely designed business cards. Once you’ve pulled the data out, Worldcard mobile will export it into your contacts, or you can choose to update an existing contact.

Ultimately, a very useful app. The text recognition isn’t perfect, but is good enough in 90% of cases.