It is quite clear that the UK and South Africa are in very different situations with respect to the HIV/AIDS epidemic. This is due in large part to behavioural changes in injecting drug users (IDUs) (Stimson, 1995) and adoption of safe sex practices including increased condom use amongst gay men, in the UK (Fitzpatrick et al, 2013). 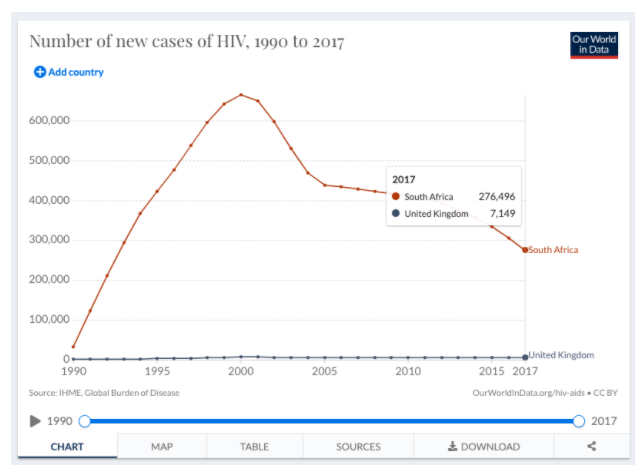 Whilst it is clear that new cases in South Africa are falling, prevalence of HIV/AIDS continues to increase as shown in chart 2: 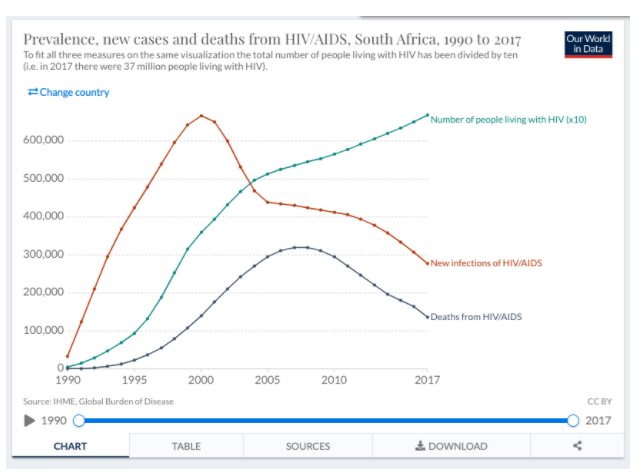 The decreasing number of new infections in South Africa is due in large part to increased condom use and anti-retroviral treatment (ART) ((Vandormael et al, 2019), alongside higher engagement by women in the healthcare system – women who are more likely than men to request tests for HIV, request and access ART and therefore become non-infectious for HIV (Birdthistle et al, 2019).

However, ART is expensive. Behaviour change is more difficult, but has a much greater ROI (Return On Investment). Due to the UK’s early approach of addressing behaviour change in high-risk groups, prevalence of HIV/AIDS has remained low, which, combined with increased safe sex and drug use practices, helps to keep incidence rates low (Stimson, 1995). Thus, the UK does not need to rely on large-scale ART interventions like South Africa, which is reflected in the costs each country must bear as shown in chart 3. 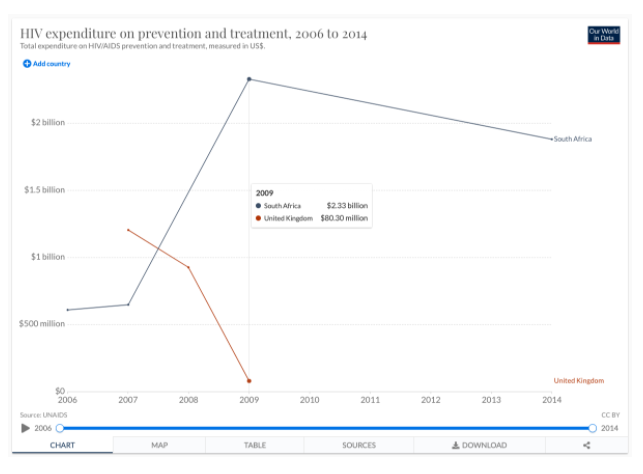 In 2009, South Africa spent $2.33billion on HIV prevention and treatment, whilst the UK spent $80.3million. It is unfortunately true that whilst prevalence is so high, ART is necessary to prevent significant increases in incidence rates, and increased cost-effectiveness may indeed be achieved by oral pre-exposure prophylaxis (PrEP) – the provision of ART treatments to individuals in high-risk contexts (Alistar et al, 2014).

Whilst in South Africa, increased ART provision (and spending), including to those high-risk groups not (yet) infected with HIV, is necessary for the promotion of health, in the UK the story is somewhat different. The low prevalence of the disease means that safe sex practices – the continued emphasis on condom use – and expansion of access to HIV testing, alongside continuation of ART for people living with HIV/AIDS and the use of PrEP for those with an HIV-positive partner, could result in the near-elimination of HIV transmission (Brown et al, 2018).