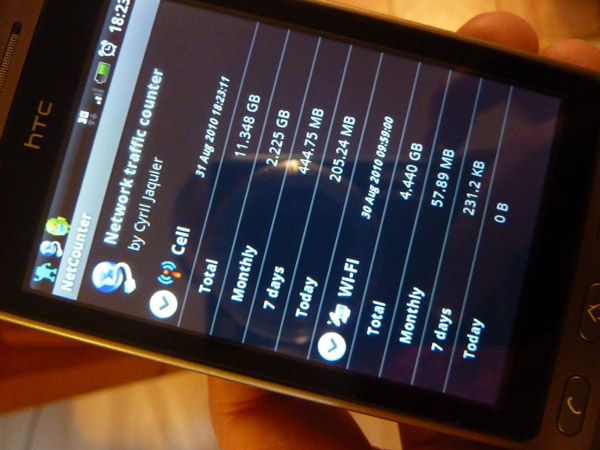 I’m with Orange for my mobile contract, and data hiccups notwithstanding, quite satisfied. When I signed up, however, I asked for their “unlimited” data tariff, which (at the time) I was told had a 500MB “fair use” limit. 500MB? Really? If 500MB is fair use, then what’s standard usage? Do Orange expect people to use less than a couple hundred MB per month? I asked them what they could do to increase the limit, and was told I could bolt on another 500MB for an extra tenner, but I (rightly) guessed that probably wouldn’t be enough either.
As it turns out, they’re able to bolt on one of the low-end datastick tariffs, which turns out as £9 for 10GB per month. Since then, I’ve been merrily downloading and munching on data without any fear of incurring extra fees.
I don’t believe that I’m a particularly heavy user – I listen to podcasts, a little bit of internet radio, use twitter a lot, a bit of web, a bit of facebook, various web apps, and a little video too. Yet, I consistently go over 1GB per month, and sometimes 2GB. If I’m using this, there must be a considerable number of people using significantly more.
What sort of data volumes do you reach per month? And what do you think would be a true “fair use” limit?

One Reply to ““Unlimited” data tariffs: What’s a true fair use limit?”